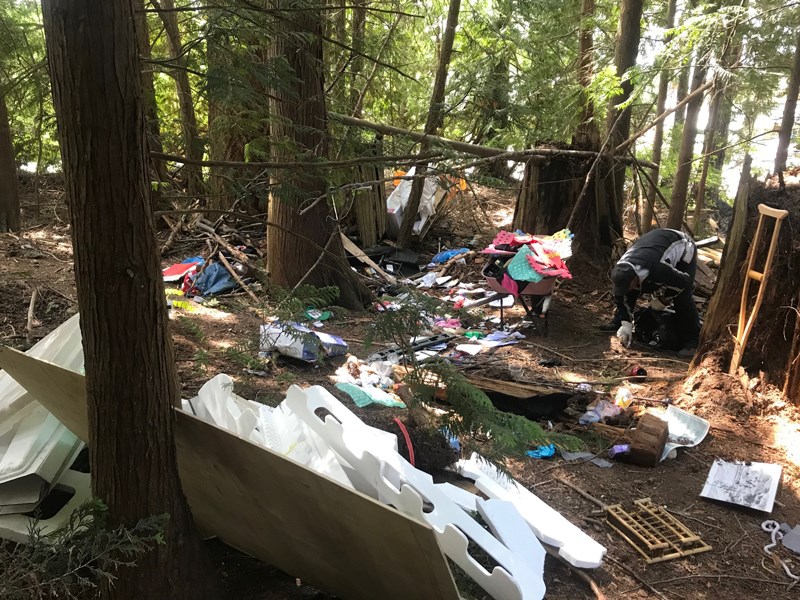 At the Thursday, September 5, regional hospital board committee of the whole meeting, two letters from City of Powell River regarding squatters in the vicinity of the at-risk housing development at 4910 Joyce Avenue were reviewed. The regional hospital board also considered a report from regional district manager of operational services Patrick Devereaux, who outlined the cleanup and recommended steps going forward.

In a letter from the city dated June 5, 2019, the regional hospital district was advised that the property was not in compliance with the city’s property maintenance bylaw. The letter stated the accumulation of rubbish and discarded or disused materials was unsightly and required immediate attention. The city indicated that contravention could result in $150 daily fines for the dereliction.

This was followed up by a second letter, dated August 15, 2019, that stated there was evidence of illegal camping/squatting in the wooded area just behind the ongoing BC Housing/ATCO construction project on July 31. The letter further stated that the city expected the conditions on the property to be remediated and the property to be brought back in compliance with all bylaws no later than August 25, 2019.

City director George Doubt said between the receipt of the letters and the regional hospital board meeting, there had been considerable work done cleaning up the site and plans put in place to ensure the problem does not continue.

The committee then reviewed Devereaux’s report, which recommended the committee recommend that the hospital board approves a budget amendment to account for the cost of regularly inspecting and cleaning the property and clearing brush along Abbotsford Street and Joyce Avenue, and that a budget amendment bylaw be forwarded to the November 2019 board meeting.

Electoral Area B director Mark Gisborne said clearing, with taxes, is close to $1,200 and it is expected to be a monthly expense. He said $7,000 for brush clearing for site lines is also a component of the recommendation and he expects it would have to be done annually to keep the brush cleared so people can see what is going on.

“That works out to roughly $22,000 per year to prevent homeless people from going into that area,” said Gisborne. “If I was a landowner inside the municipality and I was faced with this bill of $22,000 per year, I don’t like this from an environmental perspective, but I would be forced to log the area to clear it. Otherwise, it will be a recurring problem.

“I’m wondering if maybe we should consider that as an option, and replant something there that will not provide a shelter for homeless people.”

Regional hospital board chair CaroleAnn Leishman said it was an anticipated $1,100 cleanup cost because that is what this one was, but she said to keep in mind the facility for homeless people was scheduled to open in October, so she thinks there could be some relief from some of these issues once the building opens.

“I would think that the one-time $7,000 clearing might eliminate some of those problems,” said Leishman. “I don’t anticipate we are planning on committing to spending $1,100 a month, it’s just to have that budget amendment just in case that occurs.”

Chief administrative officer Al Radke said he appreciates Gisborne’s suggestion, but at this juncture, removing all of the trees is probably at the far end of the spectrum. In terms of the monthly expenditure that had been recommended, Radke said Devereaux had said the cost is just a thumbnail right now because it is not known exactly what it is going to cost.

“If we can deter it, obviously it will go down,” said Radke. “Hopefully the $7,000 one-time deal will make that happen and we will be okay.”

Devereaux said $7,000 should brush all along Abbotsford and Joyce and give a look-in at the property that was attracting illegal camping. He said even if it had to be done yearly, it’s anticipated that it would not be the same cost, because the vegetation is not going to grow back to the thickness that currently exists.

He said the report stipulates that it could be $1,100 a month but he does not anticipate it to be a monthly cost. He said the cleanup that just occurred was significant and a dumpster had to be hired to accommodate the debris.

Leishman said the issue could be revisited once the facility for the homeless is open.

Doubt said it was a reasonable amount to budget so that any future incidents can be cleaned up. He said he hoped doing what has been done so far and the brushing project should provide a deterrent.

“I’m supporting this in hopes it will be a deterrent in future to similar use of the area,” said Doubt.

The committee voted to send the recommendation to the board for approval.

One additional camp located behind the Credit Union on private land was also cleaned up. This was done independently by two people who had lived in the camp. They used the dumpster provided by the city to dispose of things and worked for between 5 – 10 self reported hours. They both earned $80. There was less community collaboration and more discontent in this clean up.

We had six dedicated volunteers who came out to clean up the camp and we worked for two hours. Our volunteers earned between $30 – $40 each. All of our volunteers, with the exception of one person, are people who have been homeless in Powell River in the last year. We also had Rob from the Overdose Outreach Team, Jacqui from Homeless Outreach, Myself and one of our volunteer’s mother working hard to get the job done.

We were well supported by the Intensive Case Management team who gave people rides, reminded everyone and spread the word. The supportive housing staff did the same and we even a dedicated Overdose Prevention Site volunteer showed up to lend a hand. Thanks to Debbie and Bryce from by-law and Martyn from the Community Resource Center for taking part as well.